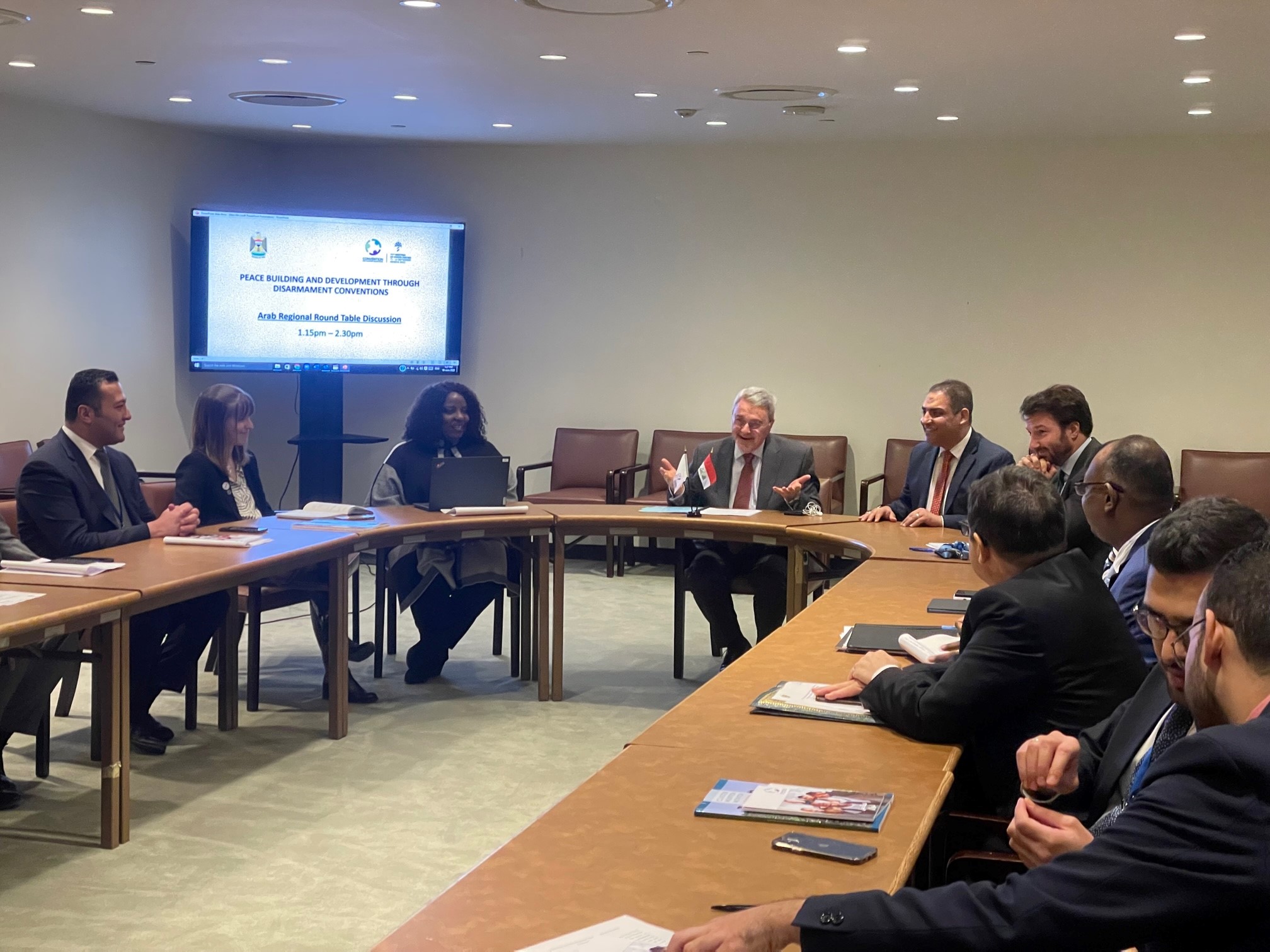 The Republic of Iraq, in its capacity as President of the Eleventh Meeting of States Parties (11MSP), hosted a lunchtime Arab Region Roundtable discussion on “Peace Building and Development through Disarmament Conventions” in the margins of the 77th session of the UN General Assembly First Committee on Disarmament and International Security. The round table was held at the UN Headquarters on Tuesday 18 October 2022. The roundtable saw the participation of 14 states from the Arab region and was opened by H.E. Ambassador Mohamed Hussein Bahr Al-Uloom, Permanent Representative of Iraq to the United Nations Headquarters in New York.

The roundtable was organized by Iraq with the support of CCM Implementation Support Unit (ISU) which together with Spain, CCM Coordinator on Universalization, and the Cluster Munitions Coalition (CMC) also participated as presenters on the implementation of the Convention. 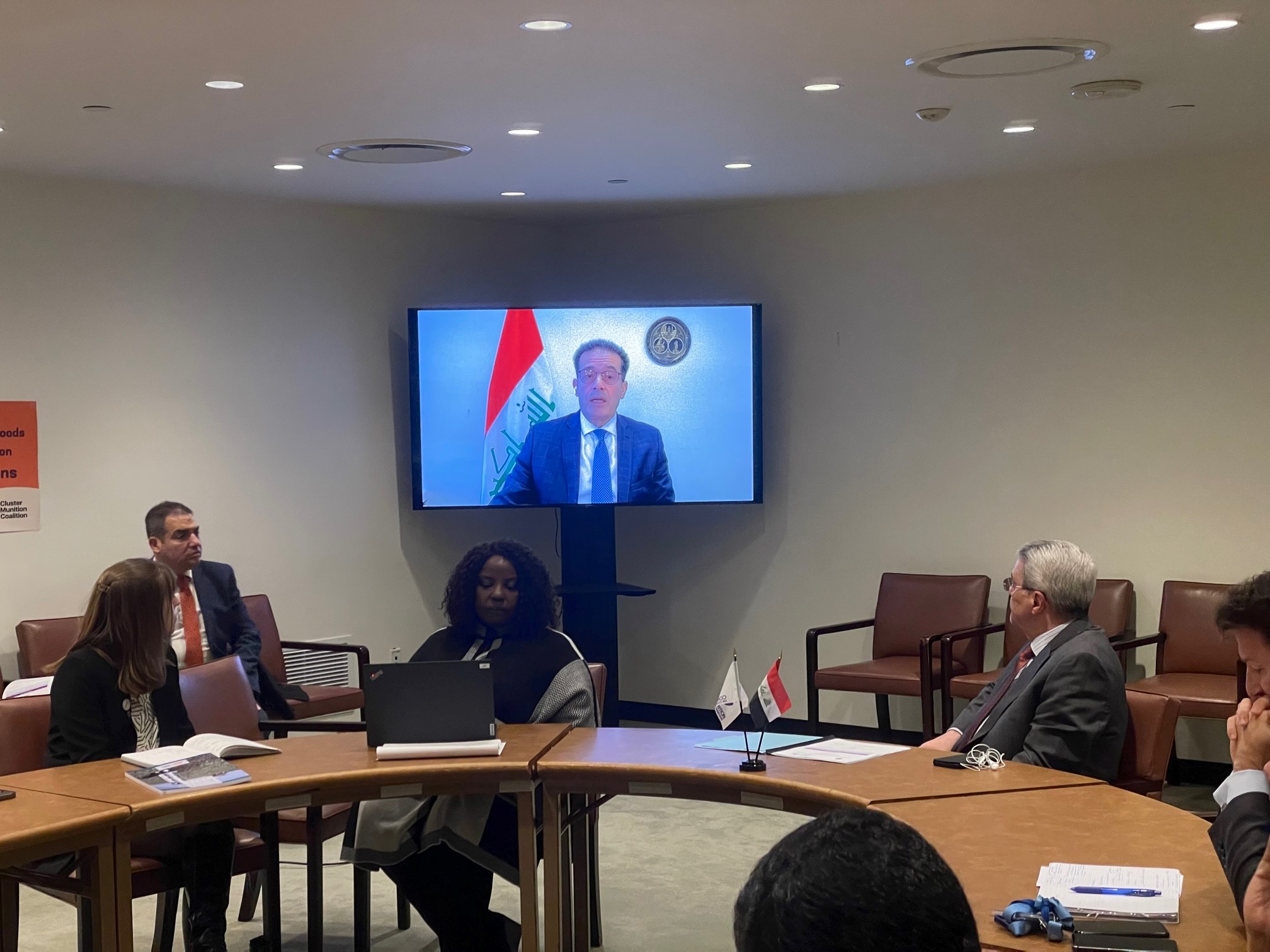 H.E. Ambassador Mohamed Hussein Bahr Al-Uloom, expressed his gratitude to the participants attending the Round Table and discussing the main provisions of the Convention.

H.E. Mr. Abdul-Karim Hashim Mostafa, Ambassador and Permanent Representative of the Republic of Iraq, the President of the Eleventh Meeting of States Parties (11MSP) of the Convention on Cluster Munitions in his opening remarks invited all Arab states to actively participate in the 11MSP. He pointed out that the Presidency in accordance with its priorities related to universalization would pay particular attention to the Middle East and North Africa, as this region was considered one of the least represented in the Convention. The President informed that the presidency was preparing to hold a regional workshop in Iraq for the Middle East and North Africa region which aimed to enhance dialogue on international cooperation and assistance on Explosive Remnants of War (ERW) and to exchange experiences and ideas to support peace and security in the region.

The President also called upon all Arab states to vote in favour for the resolution on the “Implementation of the Convention on Cluster Munitions”, which was submitted by the United Kingdom, in its capacity as President of the 10MSP.

He concluded by expressing the presidency’s readiness to provide support by all means, whether to the States Parties to the CCM or the States not Parties by overcoming the obstacles that face them in acceding the Convention. 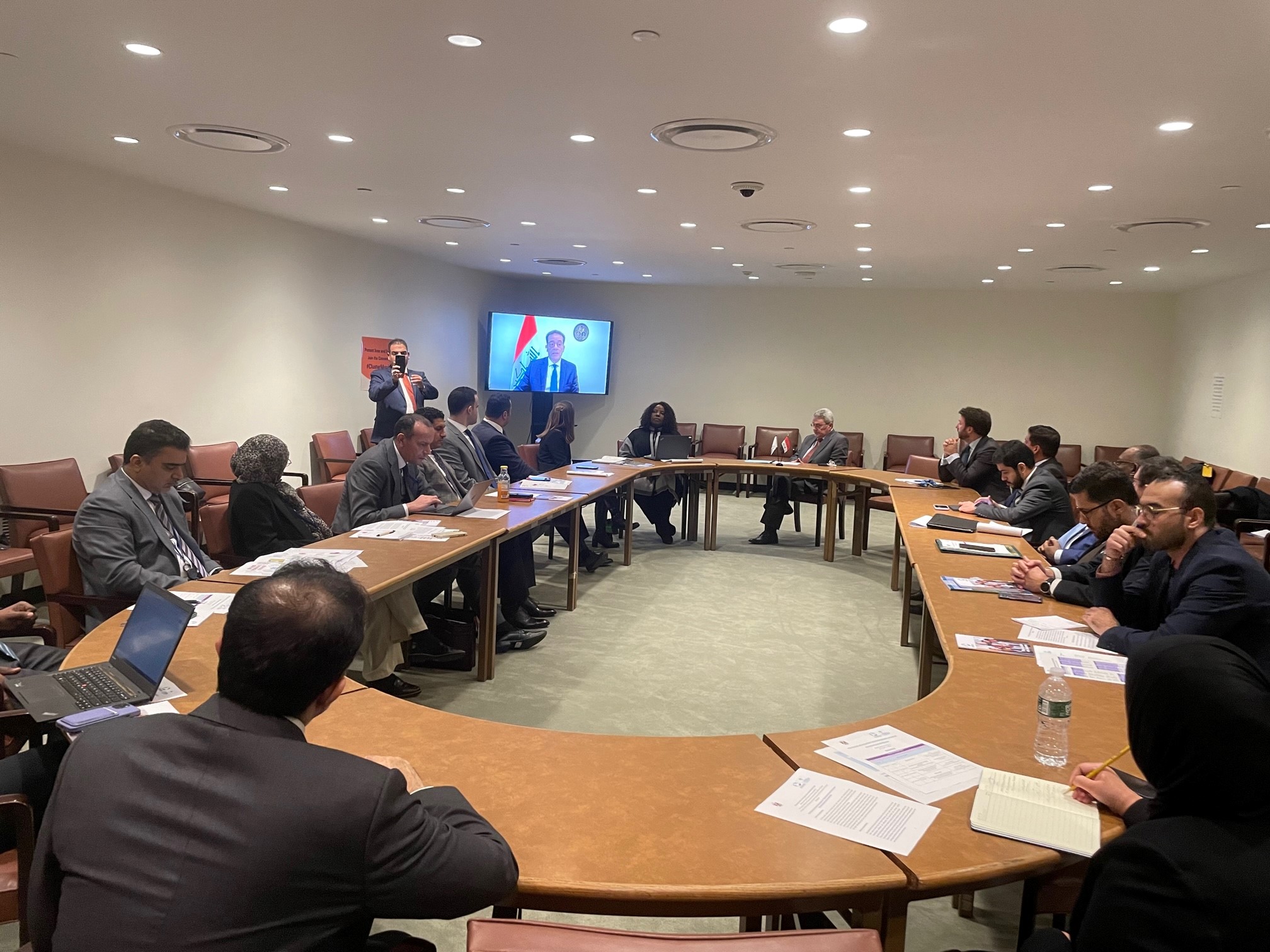 Ms. Sheila Mweemba Director of the CCM Implementation Support Unit delivered a presentation on a general overview about the Convention on Cluster Munitions. She elaborated on the main provisions of the Convention, implementation status, achievements, and opportunities.

Spain in its capacity as CCM Co-coordinator on Universalisation highlighted the challenges and opportunities in implementing the Convention provisions. It pointed out to the assistance that could be provided for states that wish to join the Convention from the ISU and the civil society.

20 representatives from 14 Arab States actively participated in the meeting (10) States not Parties and (4) parties they had the opportunity to ask the presenters questions on the Convention and its implementation.